The Al Downe Lecture is funded from the Al Downe Memorial Fund which was initially established in 2007 via a generous donation from a former student in order to provide an opportunity for Queen’s students to experience the inspiration and knowledge of a high profile Lecturer.  Subsequently the Fund has attracted donations from other students, colleagues, friends and family. 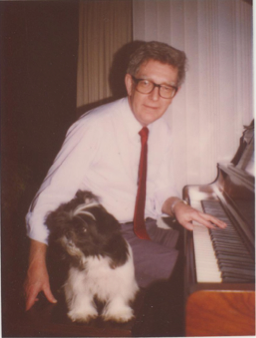 Ayward Downe, BSc (Alberta), MSc and PhD (Queen’s). Al Downe was a Fellow of the Entomological  Society of Canada and of the New York Academy of Sciences.  He taught at Kansas State and University of Saskatchewan, Regina before coming to Queen’s as an Associate Professor in 1967. He served as Head of the Department of Biology (1975-1980) and retired in 1993, but continued his association with the department until his death in 2002.  Al Downe inspired generations of Queen’s Biology students in the classroom and also in the laboratory.  His research on the biochemical and reproductive physiology of blood feeding insects was of the highest quality, and his great depth and breadth of knowledge was passed on to research students and undergraduates with rigor, energy, passion and much humor.  Al was a gifted speaker, who shared his great enthusiasm for science in ways that stirred and motivated others.  In recognition of this Al was awarded the 1992/93 Biology Department Student Council Award for Excellence in Teaching. It is thus fitting that he is remembered by bringing a high profile lecturer to speak to the Queen’s community on biology related topics.

Dr. Steve Whyard, Associate Professor in the Department of Biological Sciences at the University of Manitoba. Biotech vs Bugs - Exploring RNAi as a Strategy for Controlling Pests (2014)

Dr. Marla B. Sokolowski, Professor of Biology and Canada Research Chair in Genetics and Behavioural Neurology, University of Toronto (Mississauga). The foraging gene: will that be to stay or to go? (2010)

I've spent more time than many will believe [making microscopic observations], but I've done them with joy, and I've taken no notice those who have said why take so much trouble and what good is it?

It's a parts list... If I gave you the parts list for the Boeing 777 and it had 100,000 parts, I don't think you could screw it together and you certainly wouldn't understand why it flew

What is true for E. coli is also true for the elephant

The world becomes full of organisms that have what it takes to become ancestors. That, in a sentence, is Darwinism

Shall we conjecture that one and the same kind of living filaments is and has been the cause of all organic life?

In the distant future I see open fields for far more important researches. Psychology will be based on a new foundation, that of the necessary acquirement of each mental power and capacity by gradation. Light will be thrown on the origin of man and his history

Imagine a house coming together spontaneously from all the information contained in the bricks: that is how animal bodies are made

A grain in the balance will determine which individual shall live and which shall die - which variety or species shall increase in number, and which shall decrease, or finally become extinct

The stuff of life turned out to be not a quivering, glowing, wondrous gel but a contraption of tiny jigs, springs, hinges, rods, sheets, magnets, zippers, and trapdoors, assembled by a data tape whose information is copied, downloaded and scanned

We wish to discuss a structure for the salt of deoxyribose nucleic acid. (D.N.A.). This structure has novel features which are of considerable biologic interest

We are biology. We are reminded of this at the beginning and the end, at birth and at death. In between we do what we can to forget

I've always been interested in animal behavior, and I keep reading about it because it's so surprising all the time - so many things are happening around us that we neglect to look at. Part of the passion I have for biology is based on this wonderment"

Because all of biology is connected, one can often make a breakthrough with an organism that exaggerates a particular phenomenon, and later explore the generality

Nothing in Biology makes sense except in the light of evolution

Biology is now bigger than physics, as measured by the size of budgets, by the size of the workforce, or by the output of major discoveries; and biology is likely to remain the biggest part of science through the twenty-first century

Nothing can be more incorrect than the assumption one sometimes meets with, that physics has one method, chemistry another, and biology a third